For the past 5 days, I have been on cloud 9. My parents had planned a trip to Thekaddy (kerala). They had even booked a room in a KTDC (Kerala Tourism Development Corporation) guest house, which was inside the Periyar Tiger Reserve! It was a wonderful 5 day trip where I got to spend loads of quality time with my parents. Isn't that a good enough reason for a girl to be on cloud 9?!

Here is a short gist of the entire trip:
We went to a Madurai (tamil nadu) by train and from there, the rest of the journey was in a taxi which we had hired for the entire 5 day trip. On our way to thekaddy, we visited the Vaigai Dam (which was surprisingly full, thanks to all the rain this state has been getting) and paused again at Kumbakarai falls. I love taking bath in rivers and waterfalls and I didn't miss the oppurtunity to dip myself here!

The next day we reached Thekaddy and checked into our room at the guest house. We were to spend about 3 days there, searching for wildlife! But the day we landed there was a huge waste because of heavy rains. We were stuck in our room the entire day. We didn't sign up for any treks because nobody really recommended them at that time of the year (and also because I was a bit nervous about encountering snakes :">) We instead settled for long walks on our own and a few trips by boat in the Periyar lake. We did manage to spot quite a few animals during our stay.

Overall, the trip was pretty uneventful, which was exactly what I wanted! I had a blast with my parents after being away from them for 4 months! We didn't spot any tigers in the reserve, but nevertheless, the trip was fun. I decided not to elaborate too much on the finer details of the trip here. Instead, for my next few posts, I will just highlight a few incidences which caught my attention.

Talking about cloud 9, I was quite literally "inside" the cloud!! The drive to thekaddy involved lots of clouds which had descended on the hill there! We were literally driving through the clouds. Visibility was terrible. The driver must have been cursing the fog. But I was thrilled! I have always liked fog (probably because we hardly ever see any fog back at home). I took some pictures of the road on our way to illustrate just how poor the visibility was! And also to prove that I was literally on cloud 9! 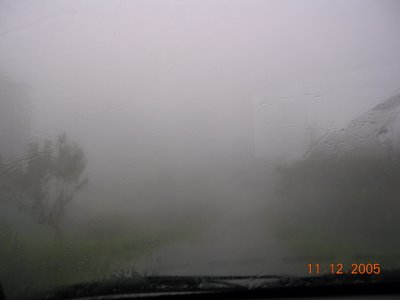 This is a picture of the road (huh? what road? where is it?!!!)
on our way to the Tiger Reserve. Looking at this picture, makes
me wonder how did the driver manage to get us there safe and sound!
You can hardly see the road! 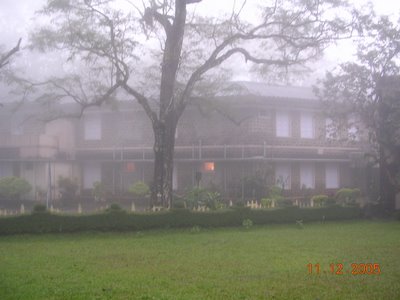 This was taken right outside our room in the guest house. I have no idea why I chose to take this picture, but after I took it and examined the picture, I realized that with all the fog, this building looked like a haunted house! (I ended up freaking myself out! Imagine having a haunted house right outside your room!) 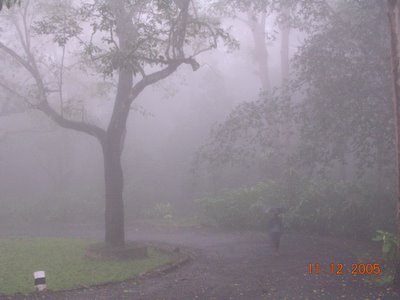 This is another example of how bad the road conditions were. It was pretty dangerous actually. You can hardly see the guy walking towards you in this picture! 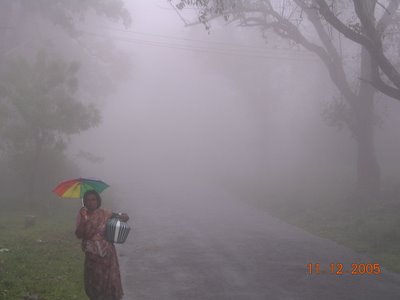 I had initially taken this to again describe how dense the fog was, but this nice old lady decided to pose for me with her colourful umbrella. So I took the snap with her! Quite a classy photo eh? A colourful umbrella and a sober background! In Periyar Wildlife Reserve, guests are advised to wear sober coloured clothes like Olive green or Khakhi clothes so as to avoid unwanted attention from animals. I found it pretty ironic that KTDC provided its guests with a rainbow coloured umbrellas to protect us from the rain! Too bad I don't have a picture of me wearing a nice olive green T-shirt and dark jeans and holding a rainbow coloured KTDC umbrella! The umbrella they gave was a much larger version of what this lady is holding and the colours were brighter! So much for avoiding attention from animals! ;)

Hey ! Nice to hear that you had a wonderful time...and about the umbrellas...LOL...those people there have some sense ;-)!! Am waiting to go to Bangalore...and then Calcutta...Anywayz...enjoy the hols!Will c u soon !And btw, awesome snaps!!

hey dudette!
glad you had a good trip and spent quality time with your parents. as you already know, i'm leaving for Indonesia later today (its 1am) i'm really excited! :)

great snaps! love the way everything looks all foggy...i love this kind of weather...too bad we're having dry hot weather back here at home...:( but anyway...nice to know u had a good time! keep posting! :)

The pictures reminded me of the rainy days in Victoria. I used to cuddle up inside a warm comforter (they really are!!) and stay like that for days, occasionally eating potato chips and choco chip cookies!!! Hey can we turn back the clock.....hey Einstein..where are you?

#ann@
Have fun in Indonesia and bring back lots of pics! then we can all sit on a vacation picture marathon! ;)

#clueless
Even i luv it when it gets foggy. I guess u and i like it coz we don't get that often in our own cities! :D

Hey!I`ve been to thekkady too! In fact, i stayed at the same hotel/motel/lodge you stayed in! Thekkady was good.. very peaceful!

Macho Girl
The name's Girl... Macho Girl... I take life with a dash of excitement, a pinch of sentiments and lots of love... shaken not stirred! Crazy not stupid!